PlayOrDown • Blog • The Best Culturally Themed Web Games Out There

The Best Culturally Themed Web Games Out There

There is so much that can be learned in a lifetime. Different cultures have different perceptions and philosophies for preserving themselves and their traditions. There have been ancient cultures that ceased to exist like the Mayans and Mesopotamia.

This time our game collection provokes interest by featuring different cultures from the Middle East, East, and a little down South. They include distinct backgrounds, characters, and images. Prepare yourself for a cultural journey to several destinations. 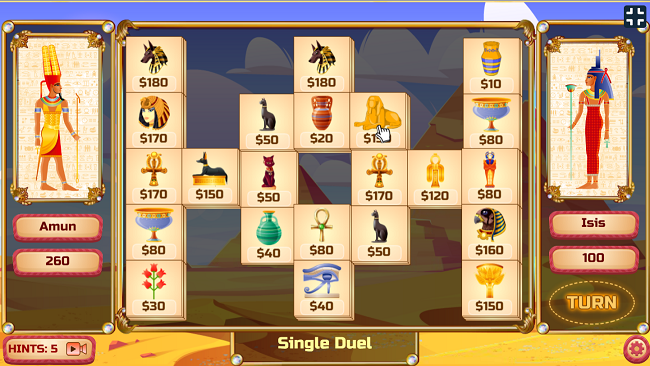 Mahjong Battles Egypt is a unique kind of Mahjong. In this installment of the popular Chinese game, the player is against a rival in a battle of matching tiles with a higher score. Each tile gives different points, and opponents should aim to match as high point tile as possible.

There are three game modes, the first one being you against one of three Egyptian gods. Each one has a different difficulty. When choosing a rival god, the player can also pick his character out of eight gods. There is also a mode called Hotseat. It lets you enjoy Ancient Egypt against a friend on the same device. You can both choose a god to play as and compete against each other.

The third game mode is Campaign, and in it, you play with a series of games against 7 Egypt gods. You can choose the difficulty before starting. Otherwise, the game follows the rules of Classic Mahjong. The player can match tiles only if they are free to move in two directions. 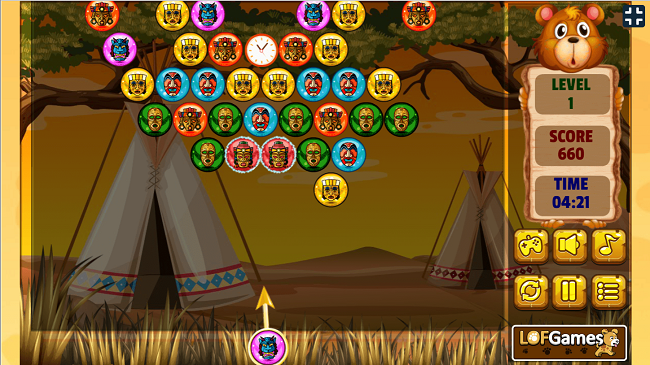 This is by no means an ordinary bubble shooter. It is based on African tribes and features different masks and an inspired background. What makes this game special is the level system split into 48 terrain arrangements that test your skills. The bubbles are consistently moving towards you as time passes. You should be ready to make complex wall shots since there are some advanced levels as you progress. Performing well and in time will award you with a time bonus so that it’s easier for you to beat the harder levels.

This bubble shooter special features some specials that can help you a lot. Some bombs destroy a small area around bubbles. What’s more, some arrows destroy an entire horizontal line. As each level passes, you should be ready for a strategy that is going to break these bubbles smart and fast. 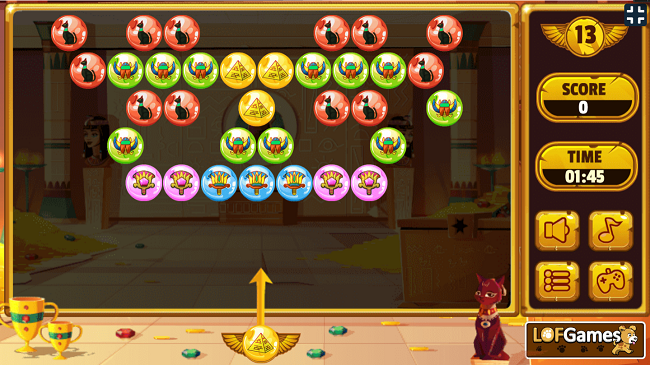 Did you know that cats were sacred in Ancient Egypt? They were so important that there was a death penalty for killing a cat, even by mistake. According to Egyptian mythology, gods and goddesses had the power to transform into different animals. Though, only the goddess named Bastet had the power to become a cat.

Ancient Egypt has provided us with an amazing cultural inheritance. This themed Bubble Shooter features Egypt symbols that accompany the player through his moves. The game is split into 36 levels, each increasing in difficulty. This one requires quick decision-making and strategy as the timer is short enough to make you tense. From the bubbles to the menu, everything is themed like you are an Ancient Egypt god yourself.

The game is suitable for those wanting to enhance their decision-making speed. Getting good in bubble shooters helps the brain work smoother and commit to hard tasks easier.

Now we’re going to the East. The Mahjong game originates from China, though this installment of the notorious title is Japan-themed with beautiful landscapes from the Country of the Rising Sun. The rules are the same as classic Mahjong. To match tiles their left or right side should be open.

This version is more beginner-friendly since, after some seconds, it starts giving you hints to where the twin tiles are. There are 16 board arrangements, each rating your high score on a 3-star basis. The slower you finish the level, the lower your final score becomes. Mahjong Sunset provides diversity in challenges for any well-versed Mahjong player who wants to earn a 3-star rating for every level.

I would recommend you try every themed title on our list. You never know which culture might appeal to you. Who knows, maybe you can start learning a new language soon?
We’ve depicted cultures that have once had strict laws and obedience. Ancient Egyptians used to evaluate the life of a person the same as the life of a cat. Their gods had the power to turn into different animals and control various parts of life itself.

Some African tribes, though, paint their bodies in white to create some dramatic body artworks. Japan is presented with its beautiful nature and landscapes. The Mahjong tiles are what depict the Chinese characters and symbols.