PlayOrDown • Blog • Classic Mahjong vs Mahjong Connect – which one should I play?

Classic Mahjong vs Mahjong Connect – which one should I play?

The Mahjong game is of Chinese origin, and it consists of 144 tiles with symbols and letters. This article’s purpose is to separate two Mahjong versions that provide different experiences. The Classic Mahjong offers gameplay closer to the original game played with actual tiles. Many people have played it, and they’d be more comfortable with a digitalized edition of the same ruleset.

On the other hand, Mahjong Connect is for those who are unfamiliar with the Classic installment. Such people are more flexible with getting used to a new game. 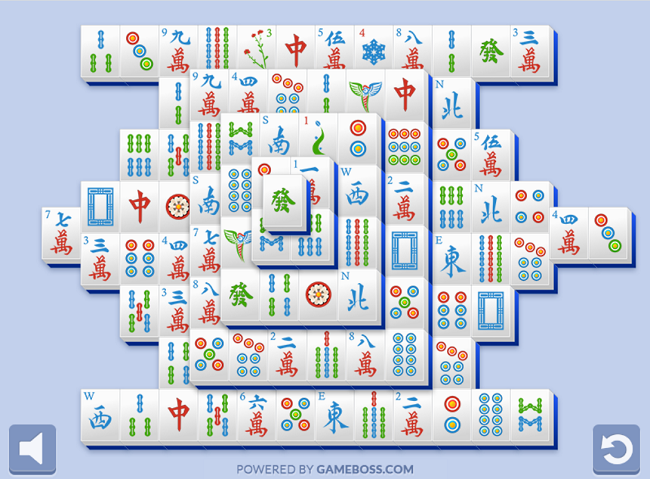 Mahjong Classic is the standard version played with Chinese tiles. The game became popular in the 1920s. It used to be a social game of great importance in America because it connected ethnic minorities. Chinese, American, and Jewish people were all hooked on the tile-matching game. It provided the basis for social interaction. As you see in the image, there is nothing except tiles. This installment of Mahjong is straight-to-the-point and would be a better choice for the elderly and people who have experience with the original game.

Mahjong is a game about matching a pair of twin tiles. The pieces must be identical. You can’t pair a 2 Dot with a 2 Bamboo tile. The exceptions are the Flowers and Seasons, as each tile appears once in the game. You can match these with any other tile in the same category. There also can’t be any tiles sitting on top of those you want to match. A tile that is blocked on both sides is considered unexposed. Finally, to match a tile, it must be able to move either left or right without touching another piece. If both pieces fit those criteria, they are considered “exposed”. Then you can remove them from the board which will free space for more tile-matching moves.

For you to win, you should be able to think ahead. Planning your moves is essential for puzzle games like Solitaire, Sudoku, and Tetris. In a situation, you might have several options to match tiles, but you’ll have to determine which one will help you free the board. Take a good look before moving a tile because one wrong move can put you in a difficult position. The board is ordered like a pyramid, so you should try and remove tiles from the top first. In this way, the bottom floor will be open for more tile-matching moves. 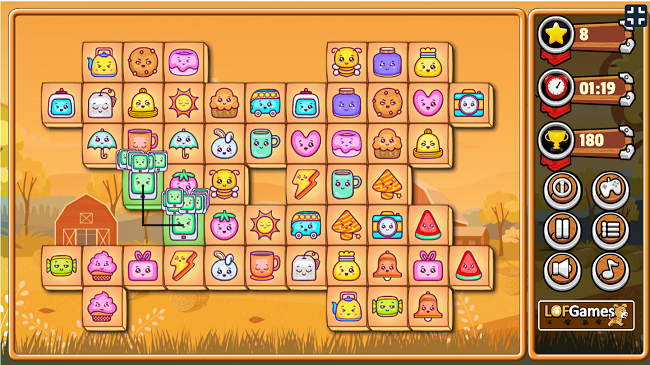 This Mahjong interpretation is different from the classic in more than one component. What makes it a Connect game is the interaction in which the player matches tiles.

In this one, you must connect identical tiles that can have a line drawn between them. The gameplay is spread through levels, each increasing in difficulty. What might seem like a quiet, fun game provides a different kind of challenge than the Classic version. It is beginner-friendly because the player can’t make a wrong move. He must remember tile patterns and look out for matches. You get rewarded for solving the Mahjong in time, and you also get a bonus if you don’t use the hint button. It gives you a clue to your next move is if you get out of ideas which tile to connect next.

The real challenge to make it in time starts after the first 5 or 6 levels. The gameplay consists of 18 such levels and provides a starting point for people that are unfamiliar with the nature of Mahjong games.

Mahjong, together with other titles on this site, has a positive impact on the brain. Not just elders need to strengthen their mental abilities. Brain exercise can be beneficial to anyone. This is because on a day-to-day basis people don’t use both of their brain parts. Mahjong is a great mind practice since it requires memory, logic, and patience.

Both Mahjong Classic and Mahjong Connect Deluxe provide a pleasant experience. What separates them is that the first one is recognized by players familiar with the game’s nature.
In comparison, the latter one is beginner-friendly and acts as a tutorial because it is based on levels. What’s good is that the game starts easy and keeps advancing. In this way, the player keeps getting more proficient with each level and learns Mahjong.