PlayOrDown • Blog • Solitaire Klondike vs Golf vs FreeCell. Which one is for you?

Solitaire Klondike vs Golf vs FreeCell. Which one is for you?

Three different Solitaire interpretations. Which one fits your playstyle best?

Well, there is Klondike Solitaire, which will suit players that have played the original game with real cards. This installment goes back to the late 19th century.

Golf Solitaire is more fun and easier to get used to. It is mostly for beginners and people that want to get introduced to the world of cards.

Lastly, there is FreeCell which was born with computers. At first, this was the only game that Microsoft Windows included together with Minesweeper. It quickly became an office favorite. 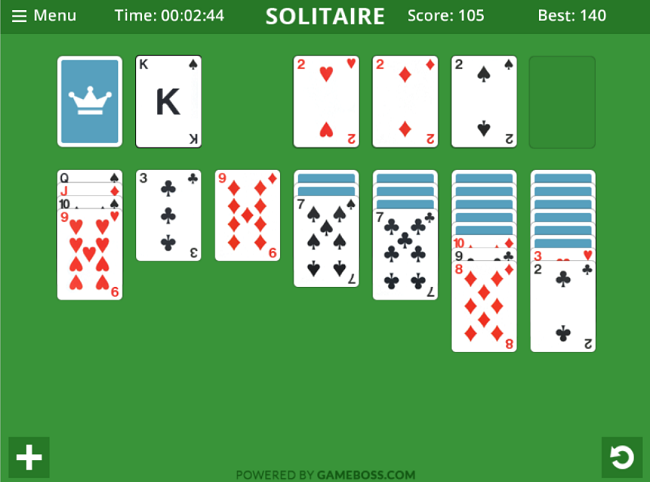 Klondike provides the player with the classic Solitaire experience.

You are presented with 7 Tableaus that must be ordered with cards in the descending K – A order. The four Foundation Piles are above. They require each suit in ascending order. It’s a great helping hand because Foundation Piles help clear the Tableaus and turn over cards.Except cards being in order, they must also differentiate in color. The Foundation Piles require the same suit in order from A to K.
The Draw Pile is where the remaining cards are positioned. When the player runs out of options, the Draw Pile is the go-to place. It delivers new possibilities as new cards appear.

There is an easier difficulty in the game. There, only one card is drawn from the pile. There is also a harder three-card difficulty if you are comfortable with card games. The player can also take advantage of free Tableaus and move his cards there to gain more space and put his strategy into action. 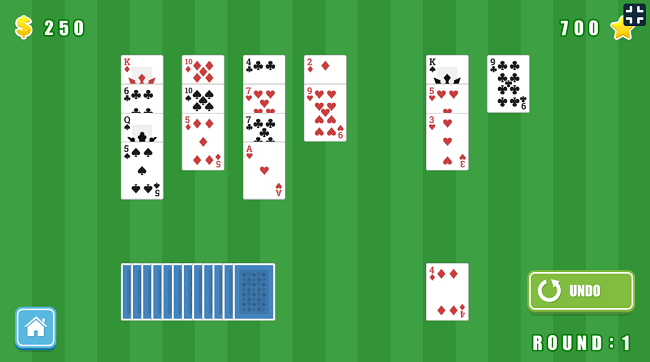 We have discussed Golf Solitaire a lot in our game selections, and it is no wonder. This game is the gateway to Solitaire games. There is no reordering between each Tableau. The player’s only moves are drawing a single card from the Pile and shifting only the down most card from the Tableaus to the Foundation. The first card is drawn from the Pile, and the next move is placing a bigger or smaller card over it.

For example, in this picture, my Red Diamond 4 needs a 3 or a 5 to be put on top of it, despite the color or suit. You also have an Undo button which takes from your points only if you discard a move in which you placed a card on the Foundation.

It takes no genius to get some experience with the game of Golf Solitaire. Although, you still need to be careful not to make a fast move that you might later regret. If you don’t plan your moves smart, you might end up losing. That might occur if the player doesn’t watch his Tableaus and his cards’ order. 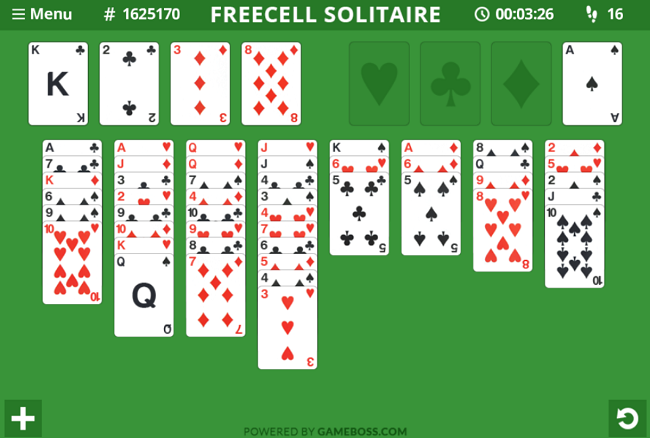 As mentioned above, FreeCell has become popular with Windows. So, if you have spent time in the office breaks playing this classic, then this might be your go-to title.
In this Solitaire installment, all cards are flipped over, and the player doesn’t have a Draw Pile. Instead, you have four empty or Free Cells that must be used to reorder cards. The Foundations here are called HomeCells, and cards from one suit must be placed in ascending order like in Klondike.

The eight Tableaus contain all cards at the beginning of a game. There, you must order cards from different colors in descending order from K to A. The condition for winning a game is building all Home Cells. The only way to lose is if you have no moves available.

After we looked over the three main Solitaire games, it is safe to say that there is no wrong one. It just depends on how familiar one is with playing Solitaire. There is no hesitation to say that Golf is probably the easiest one of three with the least things to consider while making moves.

Klondike and FreeCell are about the same. The first one is played the regular way – Draw Pile, Foundations, and Tableaus. FreeCell has all cards available from the start. It also has Free Cells that are used to help the player organize his Tableaus.

You can also give each one a go and try first-hand which suits you best. Use them to advance in the world of cards, kill some time and sharpen your brain skills. Whatever your experience from Solitaire is, you are only gaining and never losing. That is the mindset it puts the player in.