Sudoku is a logic-based numerical puzzle game. Over the past 20 years, it has quickly become one of the popular puzzle games in the world, and now you can play Sudoku 24/7 on the web

The object of the game is to complete in the missing digits on a 9×9 grid so that every column and 3×3 square on the game has all the numbers from 1-9 without any repeating numbers.

There are different levels you can choose when playing Sudoku online. The easy level has more numbers in each square and row, so solving shouldn’t take too long. As you play, you’ll start to recognize different patterns and develop a strategy that will help you as you increase the level of difficulty. Once you’ve mastered the easy level, you can move on to the medium and more challenging puzzles. Playing Sudoku has been shown to stimulate your mind and even improve your memory. You can play right here 24/7 and see if you can rule the Sudoku kingdom.

There is an endless supply of Sudoku puzzles, so you can try and solve puzzles whenever you have the time. First, you need to understand the gameboard. It has three main sections: How to Play and Win Sudoku

When the Sudoku game loads, you’ll see a 9×9 grid with numbers randomly placed on the board. Much like Spider Solitaire, you will often need to look two or three moves ahead if you want to win. To play, you will have to determine which numbers should fill in the blank spaces. The rules are simple:

1. Each number can only appear once per line. This means that you have to look at the row and column before adding the number. 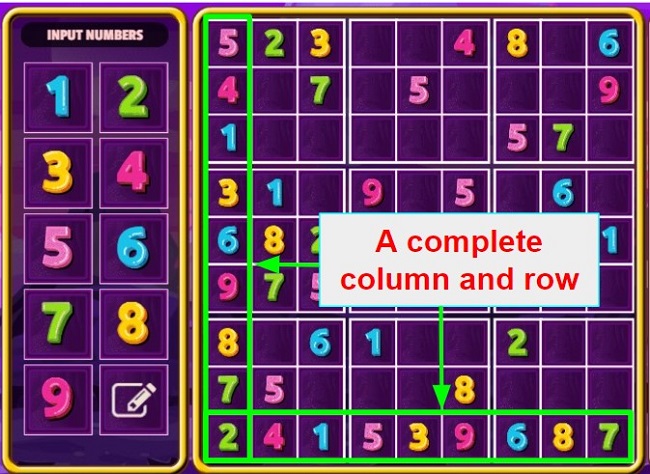 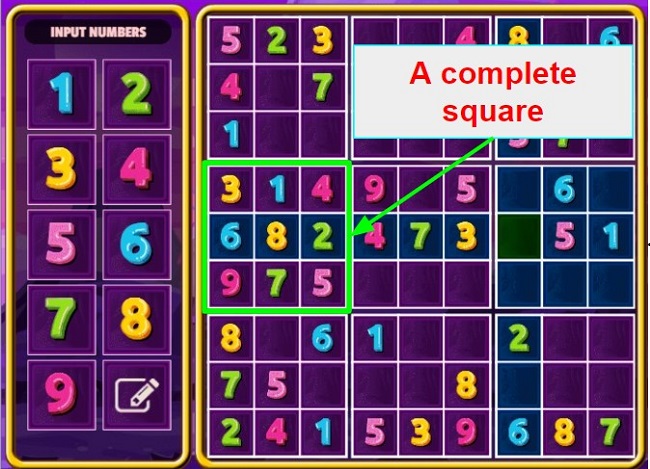 To complete the puzzle and win Sudoku, you will need to fill in 81 boxes on the board correctly.

Tips to Become a Sudoku Solver

• Look for the easy wins: This is sometimes known as the Simple Technique. At the beginning of the game, take a look at the board and see if there are any rows, columns, or squares that have 8 of the 9 spaces completed. All you need to do is check which number is missing and fill it in.

• Check the square: If you’re unsure where to put a number on a row or column, it helps to look at the square areas as well to see if the number already appears in that section. Take a look at the middle row in the example below; it’s missing a 6 and a 4. By looking at the three squares, I can see that the middle and right squares already have a 4, which means that only one space is available for the missing 4. Once it’s in place, there is only one spot left for the 6, and the row is complete.

• Check the Square and Column: Sometimes, when trying to find the right place for a number, looking at just the square isn’t good enough. Much like Tetris, it helps to look at the whole board to help you find the best location for a number. In the example below, when trying to fill out the second row from the bottom, the first thing I look for is which numbers appear multiple times across the three-square sections. You’ll notice that the first and second square each have a 5, so I know that the 5 number will have to go in the third box. Next, I check the columns and see that two of them already have a 5, which leaves just one available space on this row for a 5. 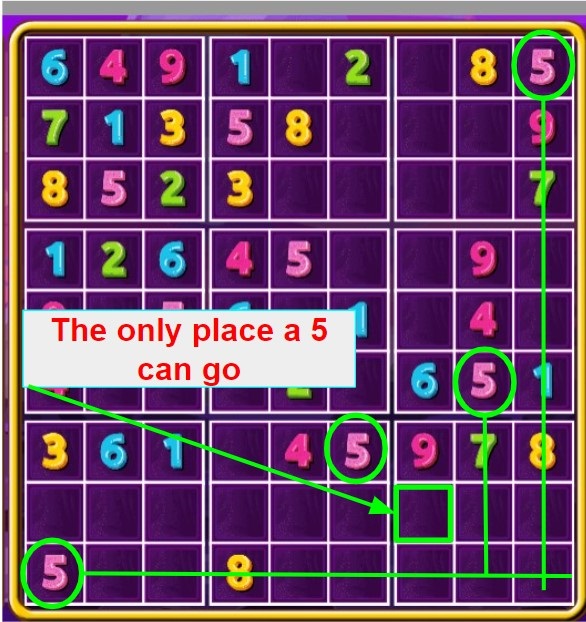 • Using “Naked Pairs” to eliminate numbers: There are times when you have too many available numbers in a column, and you just can’t solve it. You can use the Naked Pair strategy to eliminate certain numbers, making it easier to solve the rest of the section. This strategy works with rows, columns, and squares. In the example below, I filled in all the possible number combinations for each square while trying to solve the bottom row. Two squares had identical possibilities, a 5 and a 9; this is the Naked Pair. Therefore, I can eliminate 5s and 9s from the other open squares, and I know that the 5 and 9 will go in these spaces. You can also use this strategy to find Naked Triples and Quads, although they are much less common. 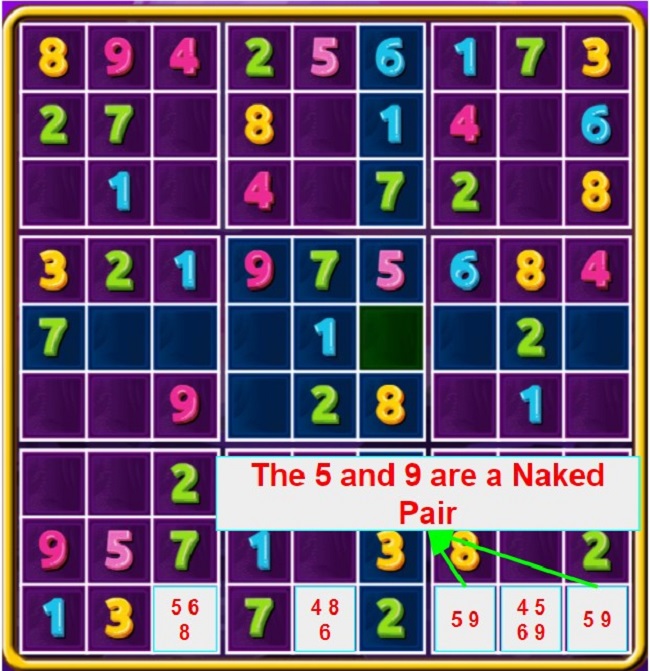 • Finding a Hidden Pair of numbers: This is similar to the Naked Pair, except here, we’re looking for a pair of numbers that are mixed in with other numbers. In the example below, I wrote out all the possible number combinations that could fit in each square.

While several squares had the possibility of a 6 or 8, only two could use both. Therefore, I know that one of these boxes has to have a 6 and the other an 8. Now I can eliminate the 3, 4, and 5 from these squares and remove the 6 and 8 from the other squares in the row. 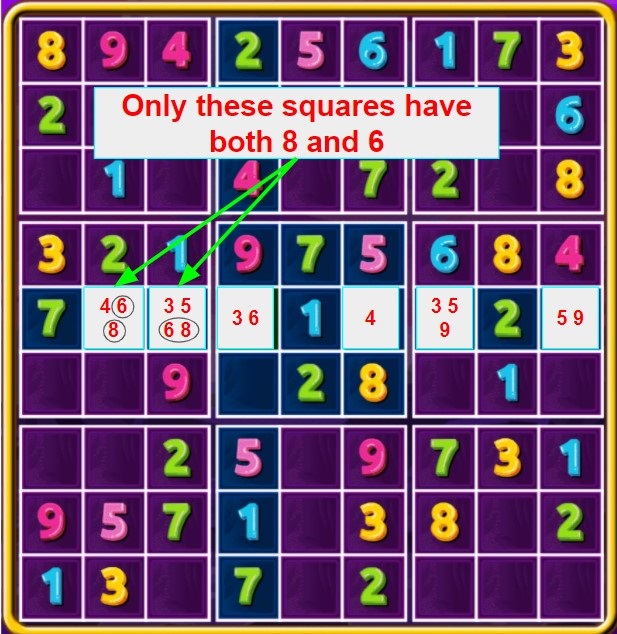 Where did Sudoku come from?

There were several versions of number solving games that are similar to Sudoku dating back to the late 19th century in France. The current game was invented by a retired architect named Howard Garns and published locally, under the name Number Game, in a publication called Dell Magazine in 1979. While the game doesn’t have Japanese origins, it became a global sensation after it was picked up in a Japanese puzzle magazine who renamed it Sudoku, which roughly translates to “the numbers (or digits) must remain single.”

Sudoku is a game that requires patience, logic, and skill. Unlike strategy games like Tic Tac Toe and Bubble Shooter, it’s not a quick game that you can play on the fly. As you increase the difficulty level, the games can last 20 minutes or more as you try and find the perfect numbers for each square. That being said the feeling of accomplishment that you get when you solve the puzzle is much greater than with other games.

Are there brain benefits to daily Sudoku puzzles?
As with most logic-based puzzles, solving Sudoku puzzles every day can improve your memory function, help you recognize patterns quicker, and increase the level of dopamine in your brain, which can increase your pleasure levels.

Can Sudoku improve your IQ?
There are many benefits of playing Sudoku, and the more you play, the faster you will get. However, there haven’t been any studies that show an increase in IQ level from playing Sudoku frequently.

Are all Sudoku puzzles solvable?
As long as the puzzle was created correctly, there is a solution for every Sudoku puzzle.

What to do if I get stuck on Sudoku?
If you get stuck trying to figure out what numbers to place in a column, row, or square, leave that section and move on to the next segment. Often, once you solve one portion, you can come back to the part that was giving you trouble and see if now you’re able to solve it.

You can also try the strategies above, searching for naked or hidden pairs, and see if that helps. If you’re still stuck, make an educated guess and add a number in the square. Remember which squares you made your guesses with, in case you find out later that there is a mistake and you have to go back and fix it.