Bubble Shooter is a timeless classic. It’s one of the rare games that has not only stood the test of time but became more popular as it aged. It began as an arcade game, and as the gaming technology improved, it was released as a computer and mobile game as well. Now you can play Bubble Shooter online for free directly from your browser – no download required.

While it seems like a simple game, Bubble Shooter has become popular among online gamers of all ages. It’s easy enough for little kids to play, but the strategy and challenge of winning appeals to players of all ages.

The Bubble Shooter Game Board

There are four areas of the gameboard that you should focus on:
1. Lines: The game starts with 9 lines of colorful bubbles.
2. Shooter: Use the shooter to aim and fire the bubble onto the lines.
3. Next Bubble: You can see which color your next ball will be.
4. Bubble Chamber: When the cache of bubbles is empty, new lines are added to the game board. 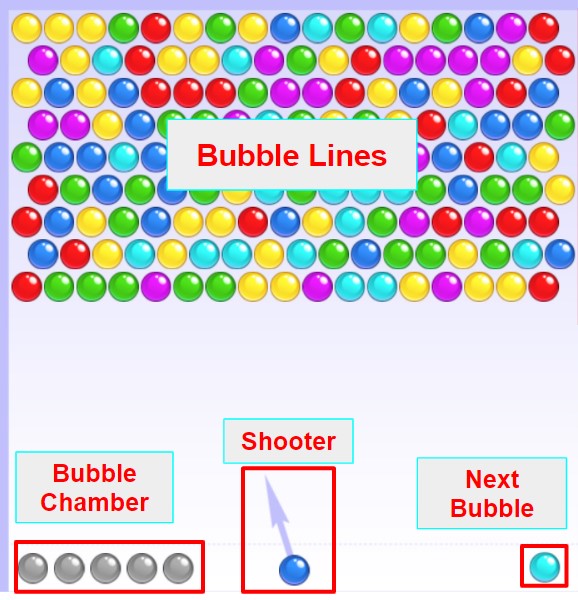 How to Play Bubble Shooter

The goal of Bubble Shooter is to pop as many bubbles and score the most points before the bubbles reach the bottom of the gameboard.

On the bottom of the screen is your bubble shooter, which has one bubble ready to shoot, and you can see the color of the next bubble as well. When you shoot a bubble and connect it with at least two or more bubbles of the same color, they will be removed from the board. The more bubbles you can pop at once, the more points you’ll earn.

You can get rid of bubbles that don’t have a color match by removing all the bubbles around them. In the example below, I can aim and shoot the green bubble to create a cluster of three matching bubbles. Not only will the green bubbles be removed, but the two yellow and the purple ones will be removed as well. 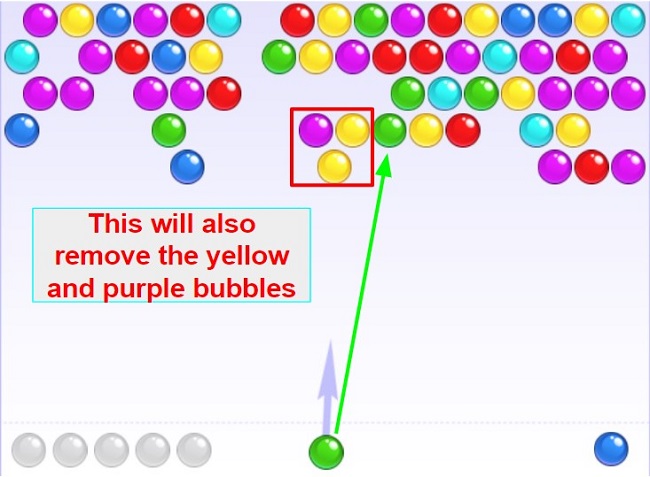 Shoot your bubbles carefully. For each shot that doesn’t remove any bubbles, one bubble will be taken out of the bubble chamber. Once the chamber is empty, all the lines will drop down, and new lines are added above them. The chamber will refill, but one bubble will be removed, so instead of six shots, you’ll only have five until it runs out. This continues until you use a bubble chamber with just one shot, and then it will restart with six shots.

If the bubbles reach the bottom of the gameboard, the game is over.

How to Win Bubble Shooter

Before you can try and win Bubble Shooter, you should decide if you’re playing for points or clearing the board of the bubbles since it could affect your strategy.

• Points: If you’re trying to beat your previous high score, your strategy should be based on removing large clusters of bubbles with one shot. The loose bubbles that don’t match the color are worth significantly more points than the ones removed as part of the color cluster. Additionally, the point values per bubble are worth more when removing a large cluster than a small one.

You will have the freedom to “waste” bubbles and shoot them off to the side since adding new lines only gives you the opportunity to earn more points.

• Clear the Board: If you want to clear the board, your strategy should be to value each ball and avoid allowing new lines to fall as much as possible. Treat the game like Tetris, look at the next bubble in the chamber, and set yourself up to remove bubbles as often as possible.

One helpful tip for clearing all the balls is to try and remove all bubbles of a single color (which is easier said than done). Once a color is off the board, it won’t come back. This will make it much easier to win. In the picture below, all colors except light blue were removed. The next shot will win the game. 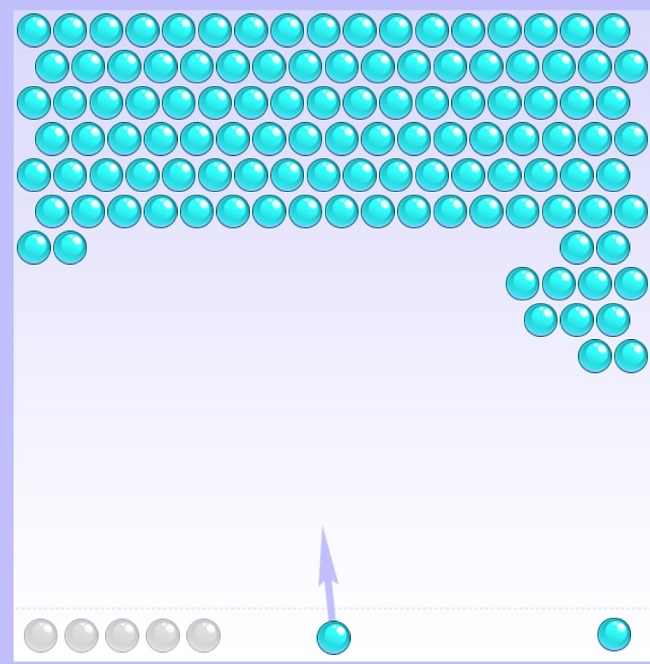 1. Plan ahead: Bubble Shooter is a strategy-based game, similar to Spider Solitaire and Mahjong. Always try and look a few steps forward to find the best place for a ball. Try and build stacks that you can destroy later. You can always see the color of your next bubble and how many shots you left in the chamber before the next line drops.
2. Use the Walls: You don’t need a geometry degree to play Bubble Shooter, but understanding angles can help you place the bubble in the proper place. Bouncing the bubbles off the walls can help you put them in a spot that you wouldn’t otherwise be able to reach. 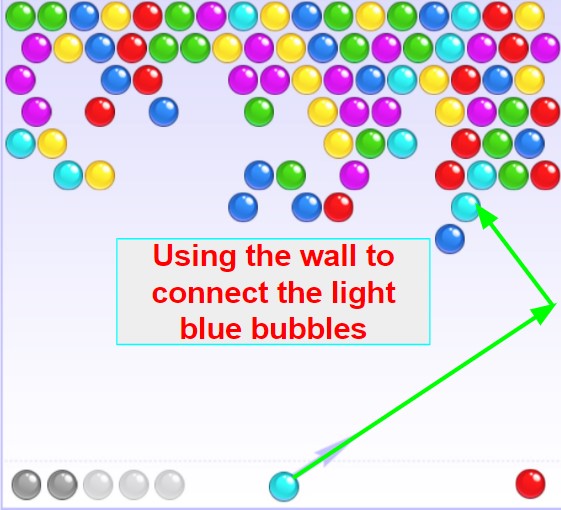 3. Put “Extra” bubbles under a pair of matching balls: Whether you’re playing for points or clearing the entire board, getting rid of large groups of balls is essential. So, what to do when you have bubbles without a good location to place them? Try and shoot them under a pair of matching unattached balls. This way, when you get the color you need, you’ll be able to get rid of the entire cluster. 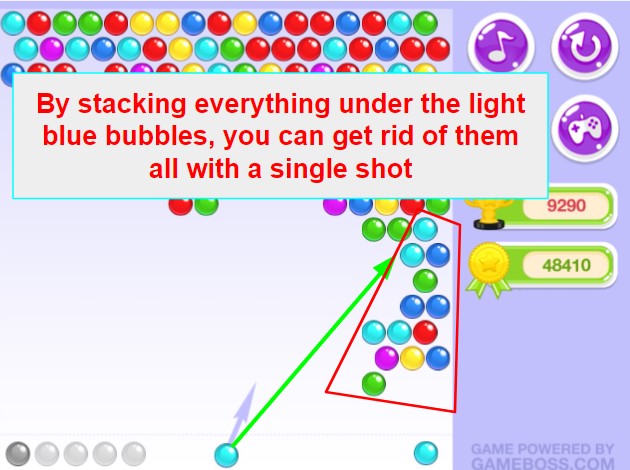 4. Pay attention to the Ball Chamber: This is especially important when you’re “wasting” a bubble. Once the chamber is empty, not only will it add a row, but the bubbles can move, ruining your next planned shot.
5. Remove a color: I mentioned earlier that removing a color is necessary when trying to clear the entire board. This can realistically only be done when you’ve already removed most of the bubbles from the board. One thing that often trips people up is when there is a single ball on the top row, and you can’t get rid of it by removing the bubbles around it. 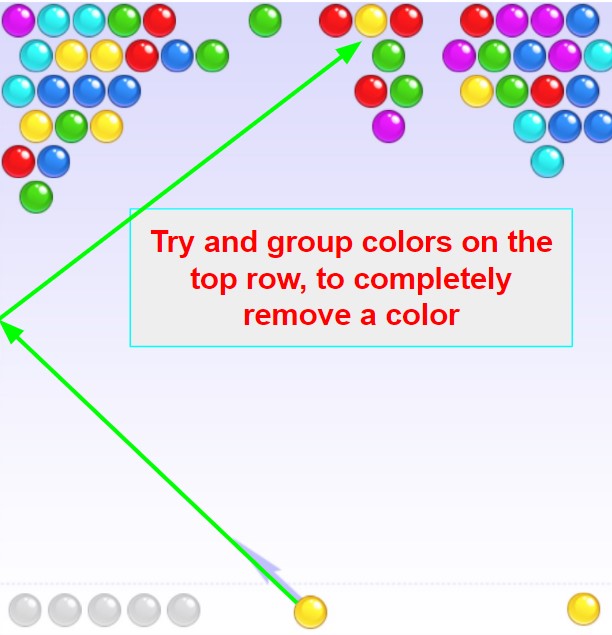 It’s important to pay attention to the bubble chamber as well. If you use your last bubble to shoot it next to a single ball, it will add a new row, defeating the strategy’s point.

Bubble Shooter was initially developed in 2002 by Absolutist Ltd. It was inspired by the Puzzle Bobble video game that Taito released in 1994. The game’s rise in popularity began in 2010 when it was released for iOS and continued in 2012 when the Android game was released.

In 2015 things really started to get interesting. Absolutist sold the gaming rights to Ilyon Dynamics, who released Bubble Shooter on Facebook Messenger and Skillz, an eSports platform. This introduced the game to a whole new audience and added a social and competitive aspect to the game.

Over the years, there have been different versions of Bubble Shooter. Some games include Power Ups, boosters, multiple levels, and timed games. However, the classic Bubble Shooter version remains untimed, with no special power symbols.

Is Bubble Shooter safe to play?
Bubble Shooter is a safe game to play. Playing it on our site won’t install any malware, spyware, or viruses on your device.

Are there multiple levels in Bubble Shooter?
There are many different versions of Bubbles Shooter. Some include two versions, Sniper and Classic. Sniper is time-based, and the goal is to remove the bubbles in the fewest shots possible, while Classic is an untimed game that allows you to strategize and plan your shots at your own pace.

Can you play Bubble Shooter online without Flash?
Adobe has stopped supporting Flash, which has caused some problems for Flash-based games. Thankfully, at PlayOrDown, we don’t have any games that require Flash support, and Bubble Shooter is still available for free play.