If you’re an experienced Klondike player looking for a challenge, then Double Klondike might be exactly what you’re looking for. Double Klondike Solitaire is played with the same rules as regular Klondike, but instead of 1 deck, you’re using 2 52-card decks with no wildcards. This means you’re playing with 104 cards in total, giving you quite a bit more to think about but also many more options. 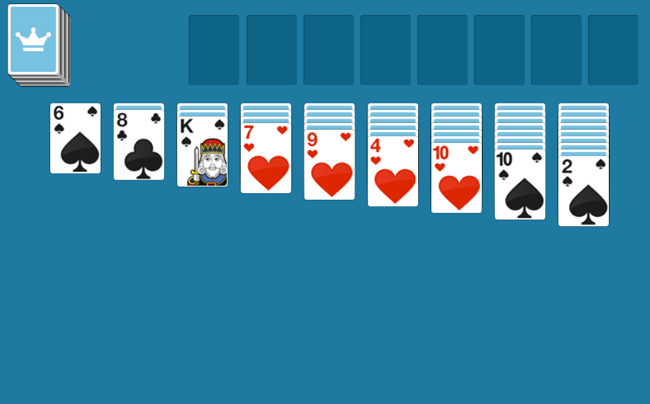 Because of the higher number of cards, you also have more Tableaus, a bigger Draw pile, and more Foundation piles:
– You have nine Tableau’s rather than seven, meaning you build more descending columns;
– The Draw Pile features all the extra cards not in the Tableaus, giving you more cards to draw;
– You have 8 Foundation Piles, rather than 4.

When starting the game, you can choose whether to play one card draw or three card. One Card is the easier version, which is more suitable for beginners. In order to win Double Klondike, you have to complete all 8 Foundation piles in ascending order, from King to Ace. As 2 of each card are present in the deck, you’ll have to complete every suit twice. An extra layer of challenge is added with the two extra Tableaus as well. Due to them having the most cards, it’s essential to uncover them as fast as possible.

Having twice the amount of cards gives you more opportunity to draw the card that you need, but at the same time, you have to be much more aware of your Tableaus’ and the cards you need. With these rules, the game is much more challenging to play, and you need to know the ins and outs of Klondike.

Are you interested in learning more about Klondike Solitaire? Our main Klondike game page features all the relevant information about the game’s rules and origin. On there you’ll also find the best tips and trips for the game; use those to become a pro at Double Klondike!