There’s many different solitaire games out there, most of which you can play in our site. If you’re a fan of simple games with a strategic element to them or you’re just a beginner in the world of solitaire, then Golf Solitaire is the perfect game for you!

Golf Solitaire is played with 52 cards in total, just like one of the most popular solitaire games – Klondlike. There are 7 columns in which 5 cards each are dealt, all cards face up. These 35 cards are the tableau you’ll be moving cards from. You draw 1 card as the base of your Foundation and the remaining 16 cards are your Draw pile. The objective of the game is to move all the cards from the seven columns to your talon pile in as little moves as possible. The really fun part about Golf Solitaire is that even though it’s a very easy game to get the hang of, there’s also a lot of room for strategy and a high skill ceiling.

Your board in Golf Solitaire is divided into three sections:
• The Tableau – 35 cards are dealt in 7 columns of 5 cards each in random order.
• Your Draw Pile – The remaining 17 cards are placed into your draw pile face down, where you can only turn them over once you decide to draw a card. 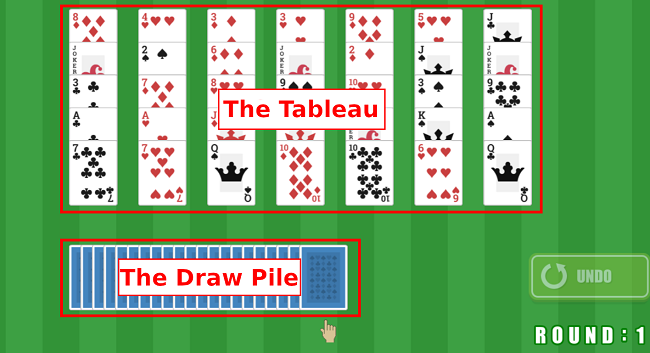 • The Foundation – To start the game you turn a card from the draw pile. After you draw, you can start adding cards from the Tableau to the Foundation, as long as the card is one number higher or one number lower than your topmost card. 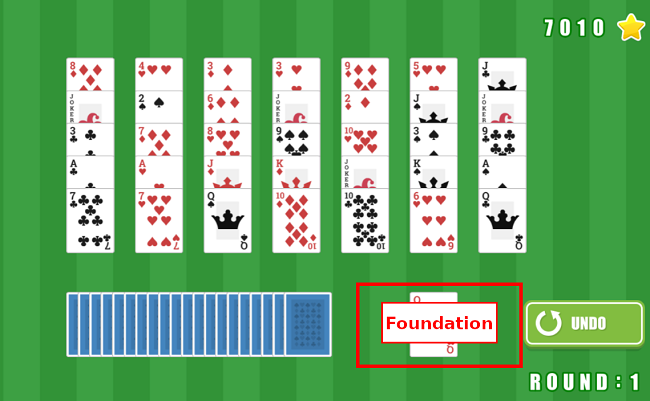 When you start the game you’re presented with a Tableau of cards and a draw pile. To start off the game, draw your first card from the draw pile – this is now the topmost card of your Foundation. You can now start moving cards from the tableau to your Foundation.
Sounds simple right? Golf Solitaire is a very straightforward game, there’s only a few rules you need to know to boss the game like a pro:

When you’re adding cards to your foundation, you can only play with the topmost card on each column (the one that’s closest to the player). This means that you have 7 options at a time to choose from at most. Once you move a card to your foundation, the card beneath it becomes available for play.

Cards only go one rank higher or one rank lower

What do I mean by this? Cards can be moved from the tableau to your Foundation only when they’re one rank higher or one rank lower than the top card of your foundation.
The only exception to this is the “Joker” card, which is a wild card and counts as any value for your Foundation – you can put it on top of any card and you can put any card on top of it, regardless of value. 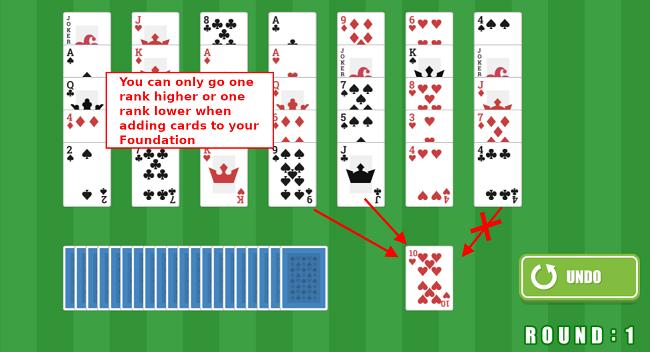 Although this is more of a suggestion rather than a strict rule, as you can technically draw as much as you want to from the Draw Pile, it’s a good idea to only turn a card when you have no options available to move cards from the Tableau. Keep drawing until you get a card that lets you add from the Tableau to your Foundation.
An exception to this could be an available “Joker” card as you could also want to save those for a later move. 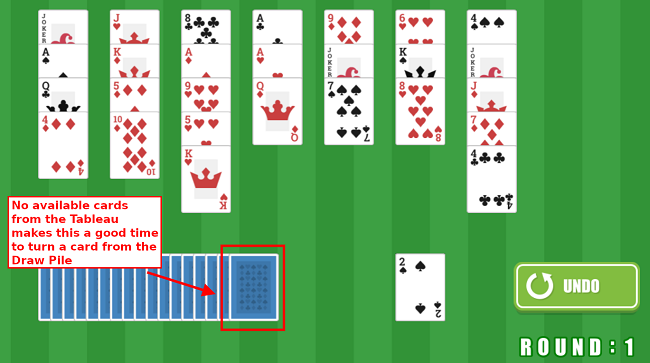 How to Win the Game

You earn points for every successful column you’ve cleared, but this only adds to your total points tally and doesn’t win you the round. To win you have to move all 35 cards from the Tableau to your Foundation pile.
There is no set order in which you need to clear the columns to win, meaning it’s up to you to plan your moves. The less cards used from your Draw Pile, the higher your score will be at the end of the round once you’ve won! 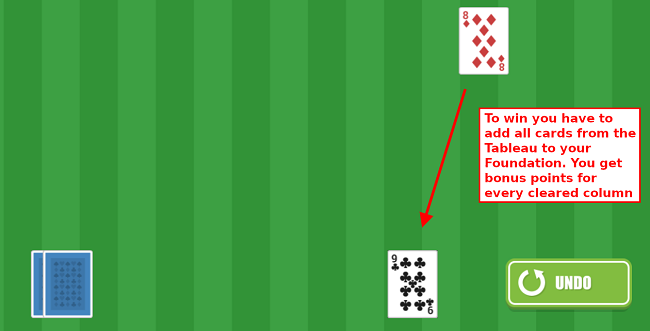 If you run out of cards in your Draw Pile before cleaning the gameboard you lose the game, so make sure to only draw when you’re absolutely certain you need to.

5 Clever Tips to Turn You Into a Real Pro

Golf Solitaire can be a very fun and addicting game, but it can also quickly turn frustrating if you get a few unlucky draws. Luckily, it’s also a game which is based more on skill and strategy rather than dumb luck, so here are some tips to help you with becoming the king of Golf Solitaire!

Tip #1: Take a close look at the Tableau before drawing

It might be tempting to draw to open up more options for yourself, but always take a quick look before turning a card from the Draw deck as you might actually miss a move. Draw only when you’re sure that you have no moves available.

Tip #2: Don’t be afraid to use the Undo button

If you do make a mistake and miss a move or add the wrong card from the Tableau to your Foundation don’t worry! You can use the Undo button to rewind your last move. Use the button wisely though, as you get a points deduction every time you undo a move in which you added a card from your Tableau to the Foundation!

Golf Solitaire rewards you bonus points if you add multiple cards from the Tableau to your Foundation without drawing or using a “Joker” between moves. This makes the game a strategist’s dream as you get rewarded for actually being aware of what cards are below the topmost card from each column.
Make sure to scan the gameboard and plan your moves beforehand so that you get bonus points!

While there is a timer in some versions of Golf, in our version of the game there isn’t one. Unlike games like Tetris where you have to make quick decisions, this version of Golf Solitaire is entirely based on patience and strategy – just like real golf! Having this in mind don’t rush to move the cards to your Foundation or to draw. Scan the board, try to be aware of every available move and take your time.

Tip #5: Try to move cards from all the columns equally

Try and avoid clearing columns one by one, as this actually lowers your available options when adding cards from the Tableau to your Foundation. Having more columns available means you’ll also have more moves available.

Obviously if the better move is to finish a column there’s no reason not to do that, but you should always try and give yourself as many available options as you can for as long as possible in the round!

I know I said I’ll only give you 5 tips to turn you into a real pro, so let’s count this as a bonus tip. And this one is really helpful – you don’t lose any points when using the Undo button if you want to rewind turning a card from the Draw pile!

Are there points in Golf Solitaire?
There’s a fair few ways to gain points in Golf Solitaire: adding multiple cards from the Tableau to your Foundation without drawing or using a joker card; finishing a column; finishing a round. The more points you earn the higher your final score will be, so points are definitely a fun way to challenge yourself in each game of Golf Solitaire you play. Our version of the game also features your high score, so you can try and set new personal records with every game!

Is Golf Solitaire difficult to play?
It really isn’t! one of the funnest elements of Golf Solitaire is how simple the mechanics are. What’s also really fun is that the game rewards clever planning and good strategy with a higher number of points, so you get rewarded for improving.

Each round takes only about a few minutes and you can take pauses between rounds without losing your score. This makes Golf Solitaire a fun and engaging game for beginners and experts alike!