Shapes Sudoku is played the same way as regular Sudoku, as your goal is to complete the missing digits in the grid while making sure there are no repeating numbers in any of the columns or rows.
Shapes Sudoku has two distinctive features. The first one is the shapes. The game not only uses numbers but also makes sure each number has a different geometry figure. This is where its name comes from, as you’re completing grids with shapes. 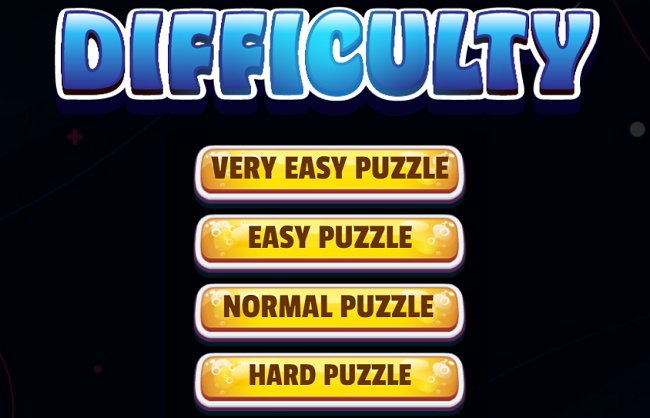 The other unique element is the game modes you can play. The game offers three grids that you can complete – 4×4, 6×6, and the traditional 9×9 grid. Additionally, you can also choose how difficult the grids will be, as there are four difficulties. The harder difficulty you choose, the fewer completed digits there will be when you start.

The 4×4 Grid is the easiest to complete. You can choose this challenge if you’re new to Sudoku and want to understand how to play the game before you jump into the harder difficulties.

Your goal is to build the four rows, columns, and grids with the numbers 1-4 without repeating numbers in any of them.

The 6×6 Grid is the next game mode that you can play. It’s played in 6 spaces that you need to build. Make sure you complete the columns, rows, and squares with the numbers 1-6 without any repeating numbers. 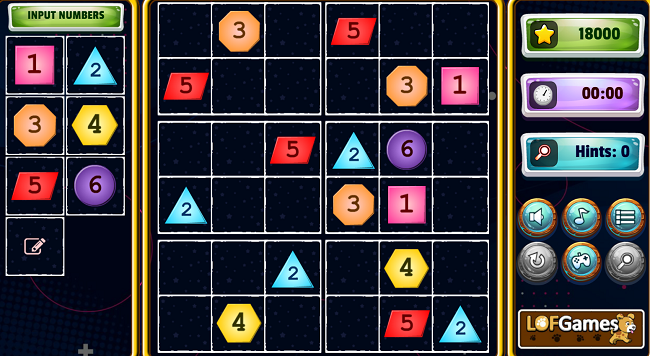 The 9×9 Grid is the traditional Sudoku puzzle that most games use. The goal is to complete the nine rows, columns, and squares. Enter the numbers from 1-9 without them repeating in any of the placements. 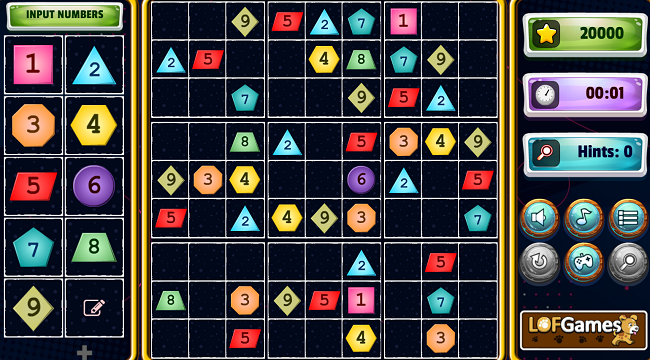 Shapes Sudoku is an ideal choice for anyone who wants to start learning Sudoku and increase the difficulty as time goes. You can be either a complete beginner or an expert, and the game will offer you a worthwhile challenge.

If you’re a fan of Sudoku, you can check out our Sudoku main game page. On that page are some great tips and tricks that you can use!