There are many different types of solitaire card games, but the most popular one is known as Klondike. The objective of the game is to move all the cards from the seven tableaus to the four Foundation piles at the top, in order from A – K, using a 52-card deck with no wilds. While it seems like a simple game, it takes skill, patience, and strategy to master it.

The Klondike Solitaire board is divided into three sections:

1. Seven Tableaus: The cards are dealt into seven piles, with each one increasing in size by one card. The top card in each Tableau is turned face-up.
2. Draw Pile: The remaining cards are placed in the draw pile, where you will turn them over to see if you can move them from the Draw Pile to the Tableau or Foundation.
3. Foundation: The first card that you can move to the Foundation must be an Ace. After that, you can add other cards to the pile, but they must be the same suit and in ascending order. 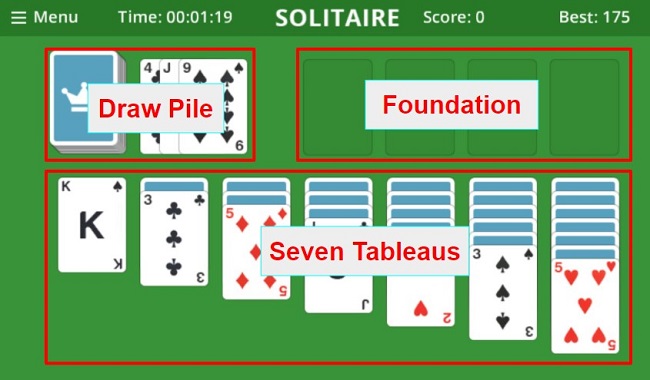 How to Play Solitaire – Learn Basic Card Movement and Rules

Before you can start a new game, choose whether you want to play one or three card draw. If you’re new to Solitaire, I recommend starting with a one-card draw and then increasing it to three cards once you’re more familiar with the game. 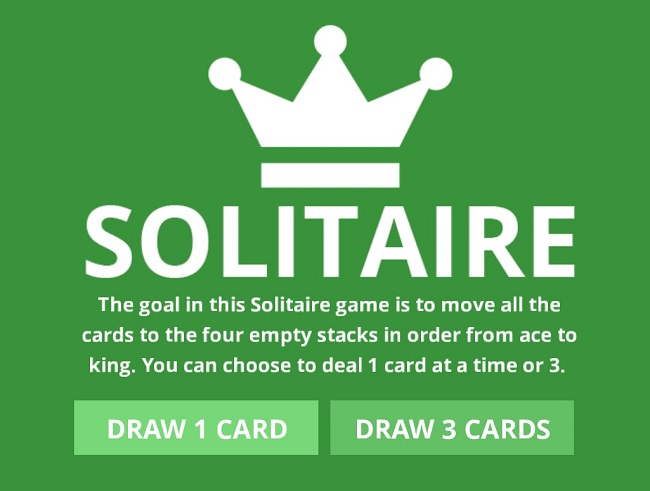 Once the cards are dealt, you can move any face-up card onto another card that is one number or value higher and the opposite color. Once you move a card, the one underneath it will be flipped over. If there are no moves available, you can turn over a card from the draw pile.

There are five ways to move cards:

1. Draw a card: Click on the face-down cards to turn over the next card.
2. Move a card from the drawn pile to the Tableau: A card can be moved onto one of the seven columns, only if there is an available card one value higher and the alternate color. For example, if you draw a 7 of clubs, you can move it on an 8 of hearts or diamonds. The one exception is a King which can only be placed in an empty column.
3. Move a card from the drawn pile to the Foundation: If you turn over an ace, it can be moved over to the Foundation pile. If are already cards on the Foundation pile, you can add cards to the pile as well.
4. Move a card from one tableau to another: Cards or groups of cards, can be moved from one column to another, provided the destination card is one value higher and the opposite color. 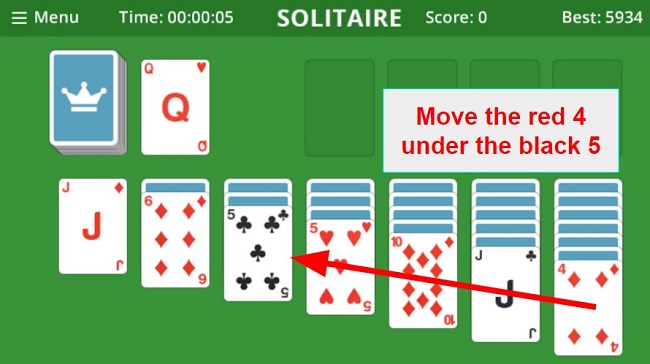 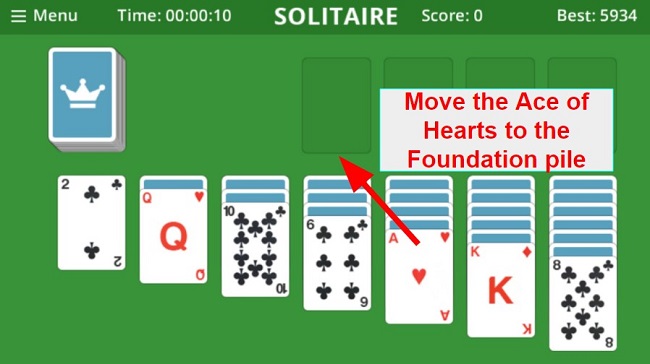 Unlike Spider Solitaire, cards can be moved up to the Foundation pile whenever they are available. You do not have to keep them on the tableaus until you can move the entire stack up at once. 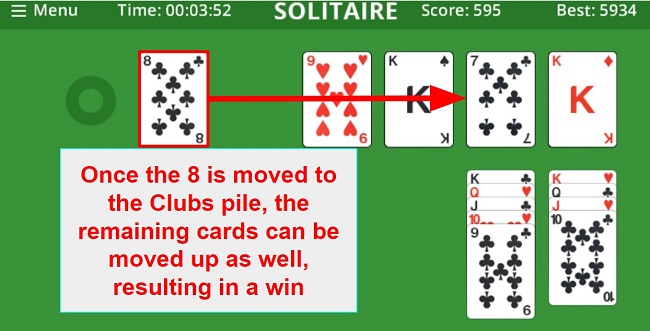 Solitaire can be an enjoyable and frustrating game to play. Just when you think you can win a game, you’ll discover that the one card you need is trapped under a pile of cards, and you can’t seem to free it. Here are some tips and strategies that help maximize your chances of winning.

Tip #2: Click on a card to move it: One of the advantages of playing Solitaire on the computer instead of a real deck of cards is that you can click on a card, and the system will automatically move it. However, don’t only rely on the automatic moves, because it won’t always make the best decision for you. It may move a card to the Foundation, but that card might be more useful on the Tableau to help facilitate the movement of additional cards.

Tip #3: Move Tableau cards first: When you have a matching pair of cards, one on the Tableau and the other in the draw pile, you should move the Tableau card first. The exception to this rule is when you know that by moving the Draw Card, it will release a card such as an ace or another card that you know will be immediately helpful. 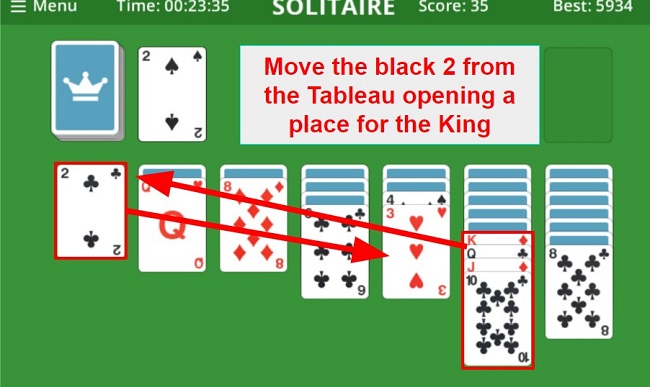 Tip #4: Use the card with the most face-down cards underneath it: One of the most difficult decisions that come up is when you have two matching cards and a place for just one of them. A good rule of thumb is to move the card with the bigger pile of face-down cards underneath it. One exception to this rule is if by moving the card, it will vacate a tableau completely, and you have a King on a different tableau that you want to move. 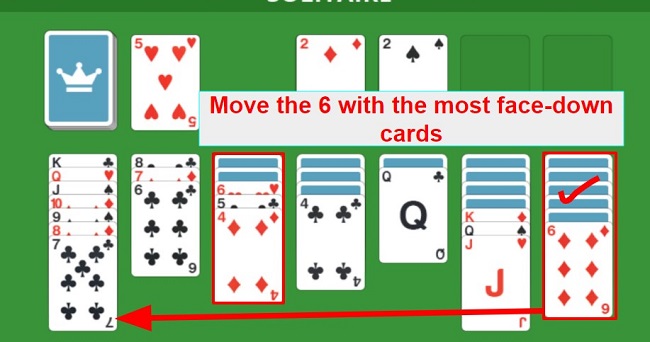 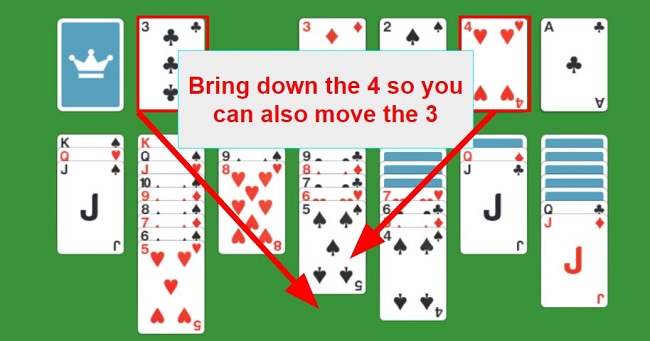 Tip #6: Use the undo button: Online Solitaire has an unlimited Undo button. This lets you go back as many turns as needed and try out different strategies. For example, if you had the choice between two piles, and the card you flipped over didn’t help, you can undo your move and try your luck with the second pile. 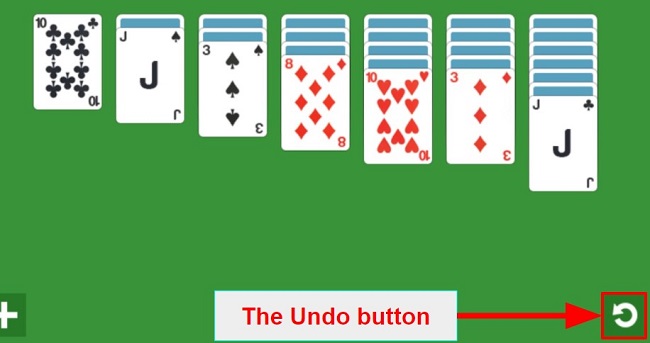 No one is really sure when who was the first to invent Solitaire. There have been reports of its origins coming from Russia, Sweden, France, and Germany. One fascinating version is that a French nobleman created the game while waiting to be executed during the French Revolution.

This particular version of Solitaire, known as Klondike, seems to have originated during a Canadian gold rush in the 1800s in the Klondike region.

Wherever the game originated from, everyone agrees that Microsoft Windows is responsible for its massive popularity. It was included in the release of Windows 3.0 back in 1990 and has become one of the most popular card games online.

Over 500 different types of Solitaire

Solitaire is a great way to kill some time, while excersining you mind. In addition to Klondike Solitaire, there are more than 500 solitaire games. Some of the most popular games are Spider Solitaire, Freecell, Pyramid, Fourty Thieves, Yukon, and much more.

Of course! You can play as many games as you’d like without creating an account or purchasing a subscription.

Are there points in Solitaire?

While there are points in Solitaire, it’s a relatively insignificant part of the game. You can earn points by moving cards to other tableaus or the Foundation. This version of Solitaire records your highest score, so you can try and set new personal records. You can earn more points by winning in the fewest amount of moves.

Is there a limit as to how many times I can go through the draw pile?

The Windows version of Solitaire included a setting called Vegas, which limited the number of times you could flip through the draw pile to three. We don’t have a limit, and therefore a game is never officially over until you win or start a new game.

How do I know if there are no more moves?

When you go through the entire draw pile, and you can’t move cards from the Tableaus or the Draw Pile, your game is probably over. You can run through the draw pile another time to see if you missed a move. If you still don’t see anything Click the + button to start a new game.