PacMan and his ghost friends have evolved a lot over the past few decades. It began as a simple maze-based arcade game. But as technology improved, new characters were added, such as the lovely Ms. PacMan and new ghosts. PacMan starred in his own TV show and has several video games that took PacMan out of the maze and put him into a whole new world. He was still eating power pellets, but sometimes instead of chasing the ghosts, he is working with them.

While the newer versions of PacMan are nice, they don’t compare to the original PacMan arcade game, which you can play on our site. Even though the premise is simple, the game has managed to stay popular and relevant. There are some strategies and hints that we’ll discuss to help you avoid the ghosts and safely gobble up the dots and power pellets.

There are five characters in this game, PacMan and the four ghosts. Each of the four ghosts has a different personality. This affects how each one moves and attacks PacMan. Once you understand this, it will help you outsmart the ghosts and eat all the dots.

• PacMan: One of the most recognized and iconic video game characters in history, PacMan was originally created in Japan. His name was “Paku,” which means Chomp. When he first came to the States, his original name was Puck-Man, but since it was too similar to a different four-letter “F” word, the company changed it to PacMan.

• Blinky: The leader of the ghost team, the red Blinky, tries to follow PacMan and catch him from behind. He is the only ghost that is faster than PacMan. He can also get a speed burst after a certain number of pellets have been eaten.

• Pinky: The one female ghost, Pinky, tries to ambush PacMan by guessing where he will go next. This will force PacMan to reverse course and run into Blinky, who is chasing from behind.

• Clyde: Sometimes labeled as the dumb one of the group, Clyde doesn’t seem as interested as the others to chase down PacMan. He can usually be found just roaming around the maze. In fact, when PacMan runs straight toward him, Clyde will often run away if possible.

• Inky: The most unpredictable ghost of the group, Inky can use the tactics of the other ghosts, making him a force to watch out for

How to Play and Win PacMan

The object of the game is simple; eat all the pellets while avoiding the ghosts to complete each level. There are 244 pellets on the board that you’ll need to chomp, and four of them are larger than the rest. These are known as power pellets.

When you eat a power pellet, the four ghosts change colors and become blue. Now, PacMan can chase and eat the ghosts. Once a ghost is eaten, their eyes will float back to the main base, where they will respawn. Don’t worry about the eyes passing through PacMan; it doesn’t harm him at all. After a ghost respawns, it will go back to its original color, so be careful that you don’t run into one of them while chasing a blue ghost.

When you clear all the pellets from the board, the next level will begin. Each level has the same layout and number of pellets to chomp. However, now all the characters are moving faster, the ghosts are smarter, and they work together to trap PacMan. While there are 255 levels in PacMan, it’s similar to Tetris, where you’re playing to beat your personal best and not win the game.

At the start of the game, you’ll have three lives. When you lose a life, the ghosts go back to their base, and PacMan returns to the starting position. You have one chance at earning an extra life – when you reach 10,000 points. This typically happens at the end of the second level or the beginning of the third one.

How to Earn Points in PacMan

• Regular Pellet: Each of the regular pellets is worth 10 points. There are 240 regular pellets in the maze.
• Power Pellets: Each of the four power pellets is worth 50 points.
• Ghosts: The first blue ghost you eat after chomping a power pellet is worth 200 points. The points for each ghost after that are doubled. So the second ghost is worth 400 points, the third one is worth 800 points, and if you can manage to catch the last ghost, it’s valued at 1,600 points. 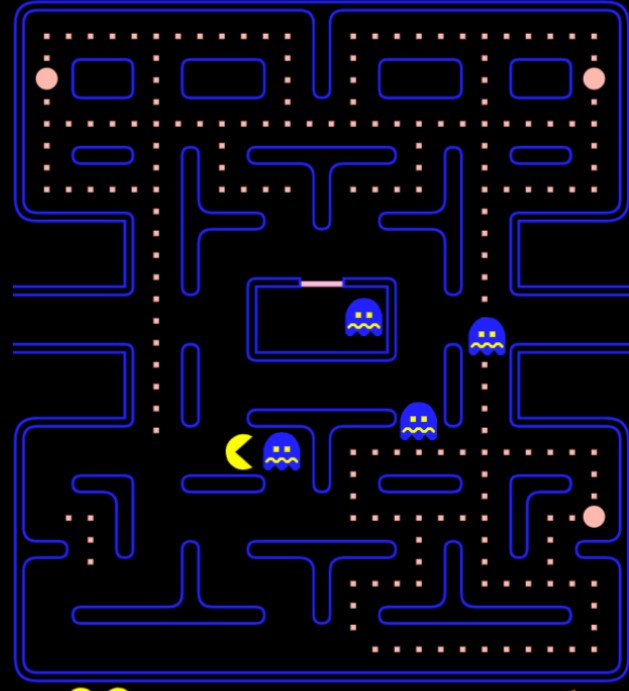 • Bonus Symbols: There are bonus symbols that can randomly appear in the middle of the maze. You get points for eating them. 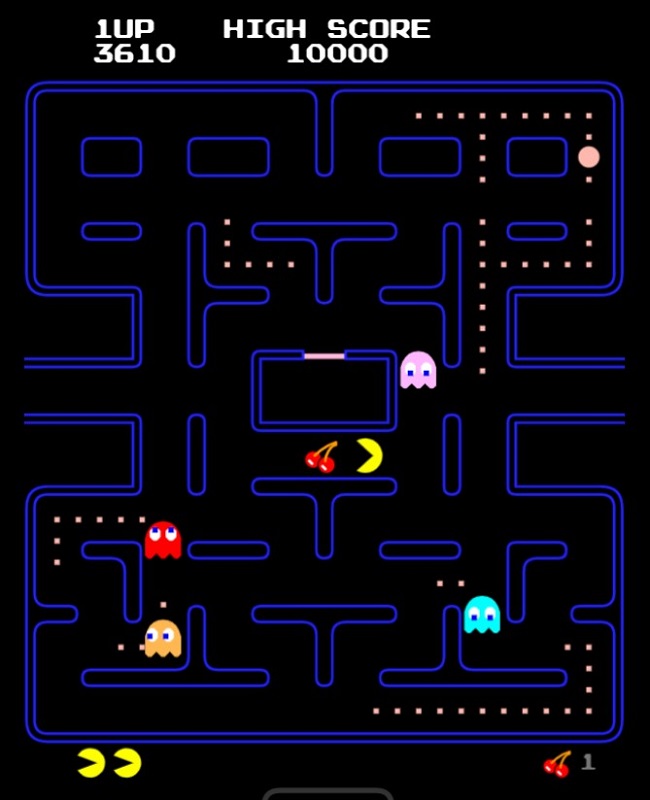 PacMan is more than just avoiding the ghosts and gobbling pellets. As I mentioned above, each ghost has a different personality, affecting how they try and capture PacMan. You can use this knowledge to get out of traps.

• Use the Tunnel: On each maze, there is a tunnel that you (PacMan) and the ghosts can go through and teleport to the other side. This can be a real lifesaver when ghosts are chasing you. Just be careful; if a ghost is coming in from the tunnel on the other side, it will eat you. 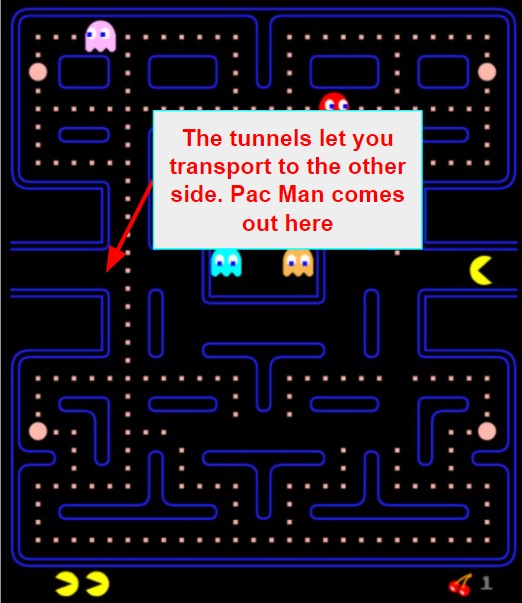 • Try and fake out the ghosts: As you learn the different ghosts’ patterns, you’ll be able to perfect this move. It works best if you’re about to get trapped by two or three ghosts. Try faking right and then going, up or down, and it can cause the ghost to switch directions, allowing you to find an open pathway to escape.
• Hang out near a power pellet: When the ghosts are in attack mode, they will chase after PacMan. If you can lure them all near the power pellet, it will increase your chances of eating all four of them and maximizing your point total. 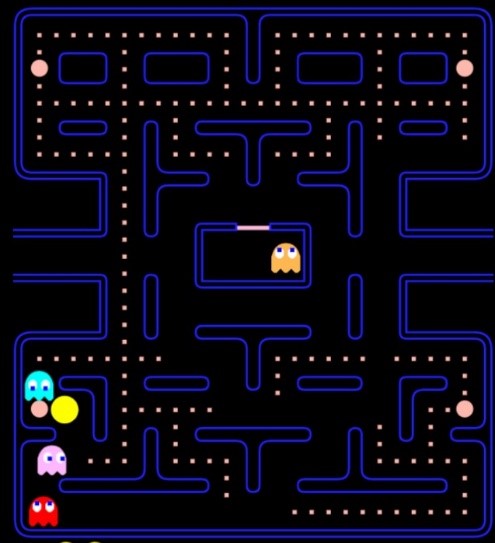 • Think ahead: Look at the maze and see what’s in front of you. When a ghost is chasing PacMan, he may not have time to stop at the wall, have your fingers ready at the arrows to move in the right direction, without stopping. Planning ahead is the key to success, much like when you play Bubble Shooter and plan what to do based on the upcoming bubbles.
• Watch out for the danger zones: There are few danger areas on the board that you’ll want to move through it quickly. These are the ideal places for the ghosts to spring a trap since they can block you in on both sides. 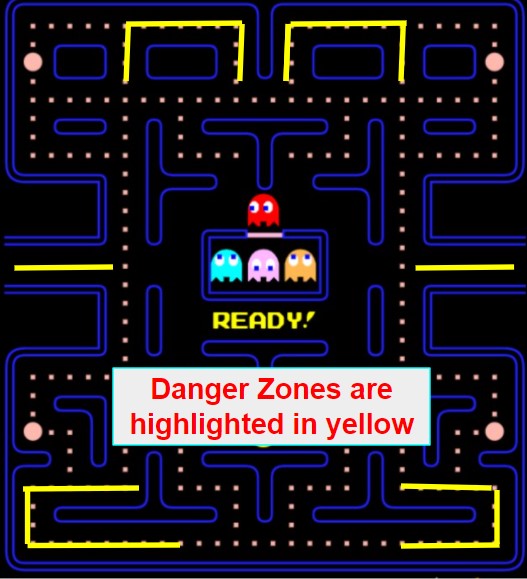 PacMan was created in Japan by the Namco company in 1980 and made its way to the United States just five months later. The game was an instant hit, and the yellow PacMan character became an instant icon of the 1980s. There were over 100,000 coin-operated PacMan arcade games in the US before 1982, and they were played more than 250 million times.

The person who designed the game, Toru Iwatani, was looking to develop a non-violent arcade game. At the time, Asteroids, Space Invaders, and Tail Gunners, all shooting games, were trending. PacMan was originally an eating-themed game, as PacMan eats the pellets, fruit symbols, and the ghosts. In fact, the original power pellets were cookies, and some say that a pizza inspired the PacMan design.

Has anyone beaten PacMan?
A player named Billy Mitchell is the only one credited with beating the PacMan arcade game. He received the perfect score of 3,333,360 points. He finished 255 levels, and when he reached level 256, the game ran out of memory, and only half the maze was visible. The other half was just a random collection of numbers and computer code. He was awarded the title of “Video Game Player of the Century.”

What the difference between PacMan and MS PacMan?
Ms. PacMan was initially developed as a knock-off version of PacMan, but fearing a lawsuit, the creators sold Ms. PacMan to Namco. Unlike PacMan, which has the same gameboard for each level, Ms. PacMan features four different mazes that players have to complete. Another big difference is that the fruit symbols move around the maze instead of staying in one spot like they do for PacMan.

Are the ghosts faster than PacMan?
The only ghost that can catch PacMan from behind is Blinky, the red ghost. The others rely on trapping or tricking PacMan to catch him.

What is the PacMan Google Doodle?
To celebrate the PacMan 30th Anniversary, Google released a special Pacman Doodle game. This version of the game was such a hit, it brought renewed interest to the game.